The History of the Civil War, penguin classic version.

The purpose of this blog is to document my attempt to participate and help with the land: first as a Peace Corps Volunteer in the West African country of The Gambia and later on after my service is over on other farms in other places. The views and opinions expressed on this blog are mine and mine alone; as such, they do not reflect any position of the Peace Corps or the United States Government.

In this post I’ll show a little bit more about our farm preparations for rainy season, the eventual change in Gambia’s landscape and crops after the rain came and some harvest pictures. There’s also some random pictures from things that happened during this great time of the year including slacklining, gardening and cows.

This first picture was taken a couple days after we had our field plowed. We had about 1.5 hectare (100mx150m) plowed by a John Deere tractor for roughly $30. It was a really good deal and before rainy season tractors are practically cruising the streets looking for work – we flagged one down, negotiated a price and had our field plowed a couple days later. In this photo we’re hand planting 5 test plots of short sorghum to test different fertilizers (oyster shell, IMO, Chicken Manure, Compost, nothing). These would later have poor germination and get overtaken by weeds while I took a trip to the States – a lesson in disappointment and the nature of farming; it wouldn’t be the last time things would go poorly on the farm. Lots of farm lessons learned in these last couple months. Modou (crouched in the white shirt) is telling me in Mandinka, “Hey, no pictures!”

Modou and Ablay running the seeder through the fields. We were sowing coos at this point.

And now I finally get my chance to run the seeder! I’d been looking forward to doing this so it was a big moment for me when I got my chance. The guys had a great time watching me, were really supportive and helpful, and many other villagers stopped to watch and say “good job! you are trying!”

This is actually a bit difficult to do – to hold the seeder straight and push it down into the ground so the front blade can till a trough for the seed to fall in. There’s definitely a moment where you look at how big the field is and think “This is crazy!” followed by “This is crazy cool!”

We were lucky to get our hands on some powdered oyster shell so tried a section of that to see if raising the Ph would help. The soils here are really acidic (5.5-6.5) so we thought we’d try a spot here with short sorghum. One 5 meter strip gets the treatment, one doesn’t.

A couple weeks and rain later we have germination of weeds and crops. Gambia starts to look really nice, and a lot like Hawaii.

Now the weeding starts. Modou and Ablay are weeding, scraping out everything but the germinating coos with small hand hos.

A couple weeks later the coos is off to a good start, having shot past the undergrowth of weeds. Field is looking good, as is all of Gambia by this point.

Coos continues to grow and we try a little bit more weeding.

My test plot of short sorghum – the one to determine if powdered oyster shell (lime) will correct Ph and help growth – didn’t germinate very well. You can see the coos on either side of this test section. Maybe 5% of the seeds germinated here, maybe because they were in the ground for a 5-7 days before a really strong rain. Another lesson learned about farming – its a tricky thing to determine when to plant, especially with a 3 month rainy season and crops that take 90 days to mature. Too early and you risk rains coming late, too late and you get muddy fields and may run out of rain if the season stops short. Overall, this rainy season was really poor from what the local farmers are saying. We were really excited about this short sorghum (it was from Senegal) but it came weakly and later got eaten by loose goats and pigs That’s the way it goes sometimes 🙂

And now for a short break to talk about some other activities around Farafenni during the rainy season.

We finally find a donkey cart and can transport much more rice husks to the farm. The machine that pounds rice is directly behind my compound so we have access to lots of husks.

We ‘trench’ sierra leone mangos and mandarin orange. Trenching lets the trees grow tall for a year so we can later graft them with better varieties. For the mangos, the sierra leone variety have very strong roots so we use that for the ‘rootstock’ but then graft a nice, late ripening, fruit on top of that rootstock (e.g., ‘keith’ or ‘ket’ variety). The late ripening helps at the market, when all the other sierra leone mangos have come and gone. To show up at the market upcountry with bigger mangos a month after the majority are gone would be a really good opportunity for people. We’re hoping these will grow and we’ll learn how to graft successfully in the next year. 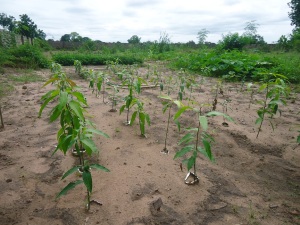 We experiment with making ‘improved compost and manure’ by adding biochar, fish liquid and sawdust. These recipes were taught to me by Josiah at Hawaii Biochar so thanks to him for helping me so much along my way here. I think these are really going to be strong as the biochar will soak up the fish liquid and manure residues. These are in a couple beds now, set to grow onions, so I’m looking forward to seeing how much they help. Porous charcoal soaked in fish gut liquid, its gotta work :).

ECHO seeds sends us some seed – this is Teff, a small grain grown almost exclusively in Ethiopia and used to make the bread njera. I learned about this in a borrowed copy of “lost crops of africa” and wanted to try it out. It’s even smaller than findo. This teff did really well and we’re multiplying seed so we can try to grow more. None of us have ever eaten njera but its a dream of ours that one day we’ll make it here in Gambia. Right now, i’ve gotta grow a lot more so I can pound it into flour – from this bed i got 1/2 cup seeds. It’s a start! Interesting fact is that in Ethiopia, anemia is rare, likely because of the amount of iron in teff and the njera bread they eat.

A sea of green – Can you believe this is where our fire belt was 3 months ago. This is the main weed I saw growing in all of our fields – Mandinka folks call it ‘nduroo” and I saw people using the main stem to make local fences.

I had a training at the school and another PCV, peter, brought out a slackline. Some cross cultural teaching with a dash of danger going on here, perfect :).

Taking a break near the field. 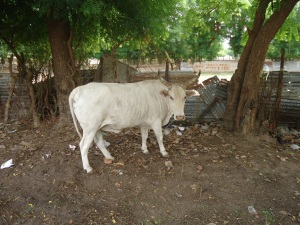 Here’s some of the money we got for it.

Ok, now back to the farm work.

This is the garden and the findo field from overhead. You can see that after a month of rain the findo is up and everything is looking nice and green. The findo field is around 40m x 32m, about 1/8th hectare, or 1/3 acre.

After 3 months its time to harvest. Luckily the guys on the farm crew knew how to do this. You can see Modou in the background and Ablay here with the sickle.

I really dig Gambians because even in the middle of harvest they’ll find a spot to take a break and brew attaya.

Here’s Modou holding up a couple ‘findo sitis’ or findo ties. You cut the findo close to the ground and tie it into bundles.

And Ablay with his findo ties. 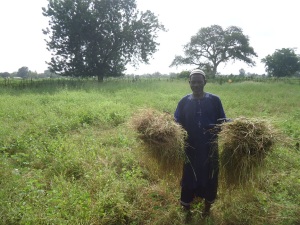 Next, we collected them on the garden fence and kept cutting.

The findo is the very small seed near the end of the plant.

This was our harvest from the first 1/3 of the field.

After you bundle the findo, you place it out to dry for about a month. When its dry you will pound it to separate the seeds and go from there with further cleaning and cooking.

So, that’s the end of the rainy season and my first findo farm. Let me know if you have any questions. Thank you for reading and supporting me in all the ways that you do.

One thought on “To Make a Farm Part 2: Rainy Season”